Mike and I have been on the hunt for this stunning orchid for over 7 years.  The location is vaguely suggested in Bob Liddelows book “A Guide to Native Orchids of South Western Australia”.  When we realised it was so close to the farm, here in Eneabba we had to keep searching.

We have been doing searches for the Queen of Sheba for about a month now each time Mike’s home from work.  Wesley was with us when we found it and it was such a little victory for our small family!  There were six out in bloom on this particularly sunny morning we found them.

They are a sun orchid so need full sunlight to open… so we were very lucky!  Seeing them in real life, it’s insane how colourful they are.  Such a delightful orchid. 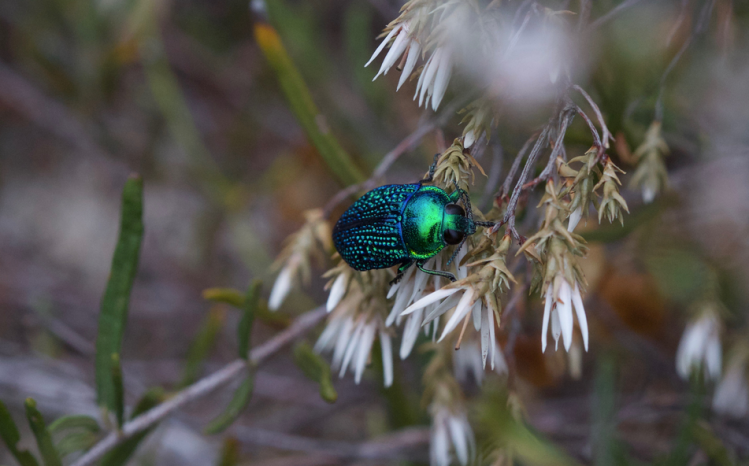 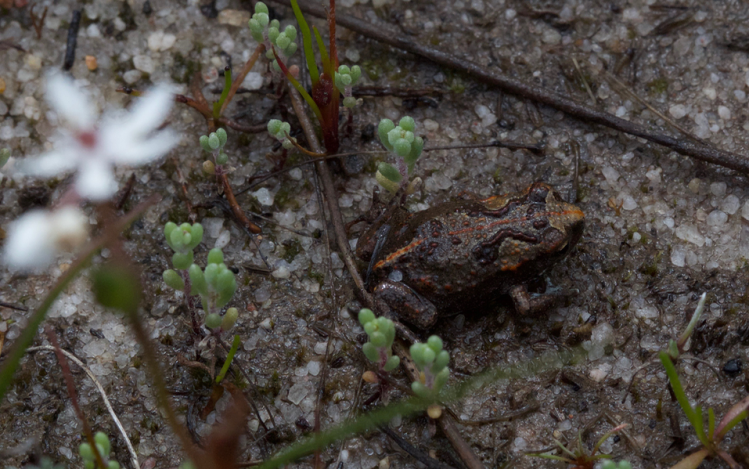 There has been plenty happening here on the property lately now that spring is upon us.  I’ve been gardening as fast as I can before the summer hits, and chasing Wesley through the bush showing him plants and bugs and spiders!  I’m still working on a community project and have also got word that a story is being published soon about all the spider’s I’ve found around the home.  Exciting times!  I’ll share that when it happens.

Wesley moved officially into his bunk bed this week – which has been awesome.  He’s such a big boy now.  He is a lover of nature, and I have to share this now before I forget.  But last week I found a large dead frog in the yard.  I’d placed it in the garden and told Wesley about a daddy frog I’d spotted.  He picked it up and gingerly played with it for 40 mins or so before Mike took him away.  The thing is, I’d watched him talking to the frog, high fiving it, and shaking it’s very stiff hand.  It was so cute.

This week we’re also preparing to host Great Grandad and Dee!  We’ll also be travelling North to Kalbarri which will also be a first for us.  It’s coming up fast – and we’re all looking forward to it!  I’ll post pictures when the trips complete so you can see what the place is like – apparently, it’s beautiful! Here is Tessa scouring the ground for signs of orchids and other plants. 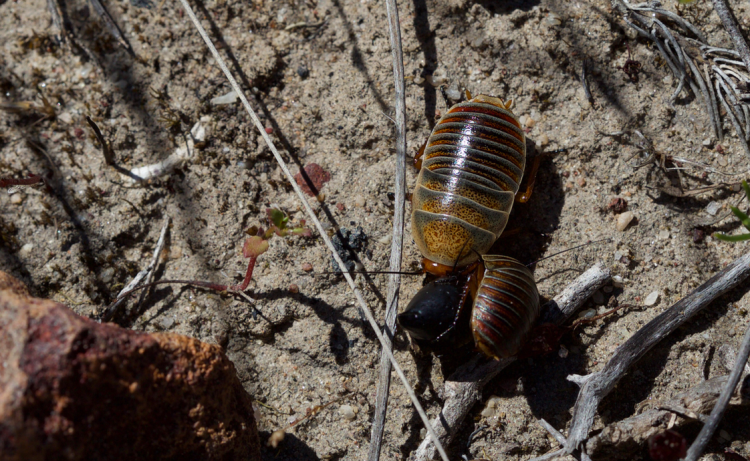 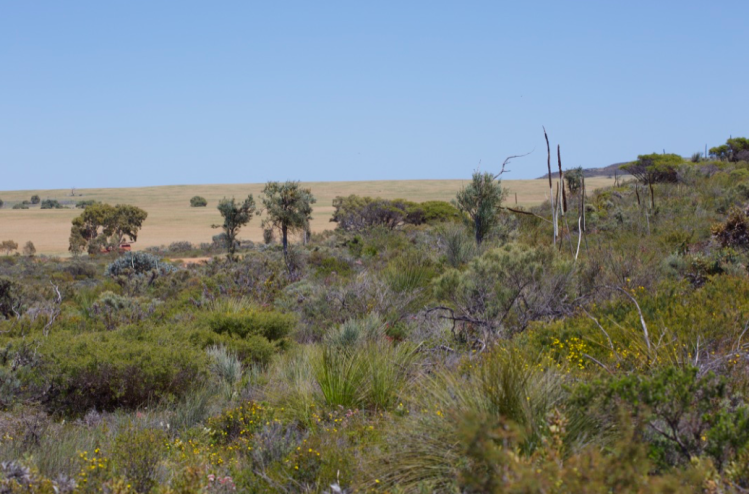 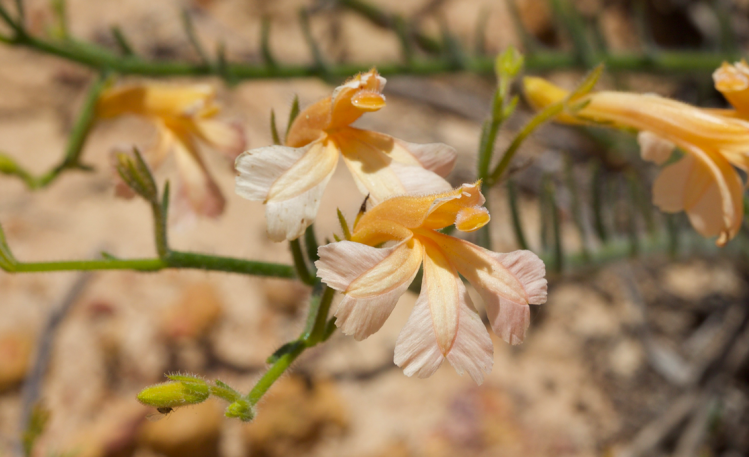 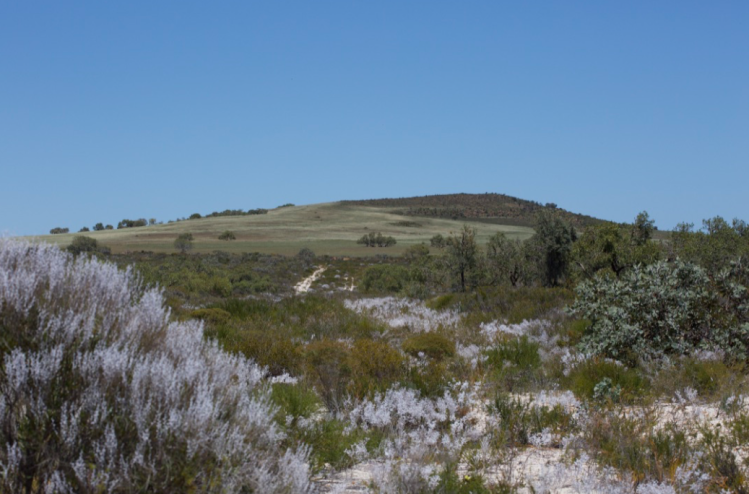 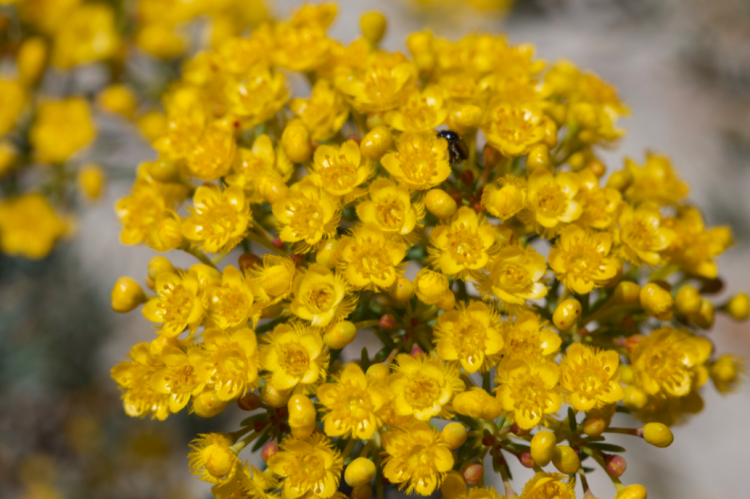 Here is a little toad bug.  Can you see him? 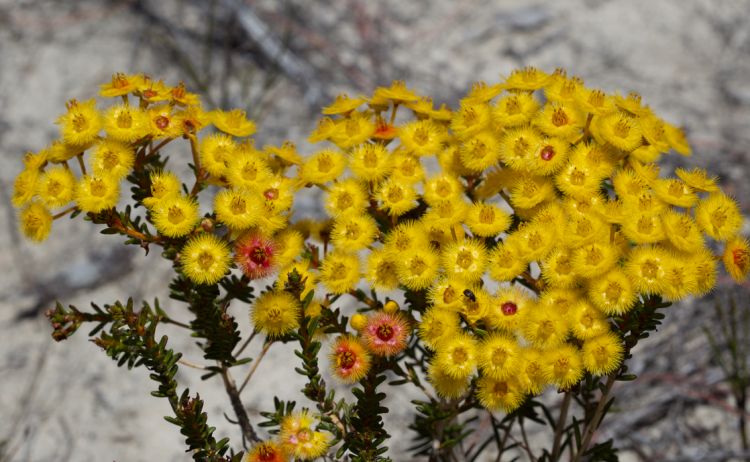 These are a few images from a morning out in the bush a couple of weeks ago.  Tessa took me out for roughly 3 hours to several spots along the farm to take a look at what was currently flowering.  The verticordia and leschenaultia were both incredibly diverse with both plants showing several species.  The pale creamy leschenaultia might be my new favourite flower, the colours are muted but at the same time fresh and almost peach like.

I did not prepare for the sun exposure, and subsequently morphed into a lobster come evening.

It was worth it. I have been periodically looking at the stationary caterpillars this morning and was away from them about 20 minutes when this amazing transformation had already taken place.  We have one left to make the change into a chrysalis and I’m hoping to capture it on film…we’ll see if it manages to happen when we’re paying attention.

I honestly cannot believe how quickly the caterpillar shed it’s skin to become this capsule of green.

The more smooth capsule photo was taken (3rd image down) after 24 hours.  The golden markings are quite beautiful and it’s simply amazing how delicate and yet ornate it is.

This morning we went to a little boys first birthday.  We’d wrapped a few books as gifts and were getting ready when I decided it would be nice to also gift him a monarch caterpillar with some swan plant leaves in a mason jar in the hopes that it too would transform for him and become a butterfly.  We were at the part enjoying the good food and company, when it came time to open the presents.  The mason jar was unwrapped and quickly a hush fell on the crowd.  The little boys father looked at me and said “My grandfather passed away one year ago, he bred butterflies.  My son Te Ahorangi was named after him’.  He had the faintest smile and it was apparent he was feeling sentimental…almost emotional.  It was a beautiful revelation.

It’s later in the evening on the same day – and Mike and I still are baffled as to the sheer coincidence and connectedness of the universe.  We have been pondering the odds of this happening…

Hopefully when the butterfly emerges we’ll be ready!  I’ll be posting more images as the week progresses.  I think we should have 2 butterflies emerging in approximately 6 days. So far there have been little changes in the pods – the lines of the wings can be seen more clearly and the top end of the structure appears to be getting darker… this could mean maybe tomorrow we may see one open?  Finger crossed!

If you’d have asked me a year ago if we’d be in Australia again in 1.5 years time – I would have shaken my head firmly and reassured you that we were going to be in New Zealand forever.  We both thought that was what we were committing to upon arrival.  We were here to stay.

Now a year on, our little boy is growing and we’ve settled in but are more flexible with where we need to be.  Mike was offered a position back in Western Australia that honestly was too good to turn down.  He’ll be flying over next month and in 4 months time Wesley and I will follow over to join him.  Just like that everything changes.

This is a conflicting decisions as we’re not too happy to be parting with family; however it does open up an opportunity for us to buy land now in New Zealand and eventually be able to set up our own little business.  I’m just in the process of submitting paperwork for another 5 year visa to stay and work within Australia, and when that’s all secured we’ll be ready to go.

I’m sure many of the readers here are shaking their heads.  How many times have we moved over the past 7 and a bit years?

We have moved from 6 locations: Banff, Melbourne, Eneabba, Coorow, Perth, Palmerston North…  I think we probably travel more than military families at this point.

Some more family is waiting in Australia for us in Adelaide and Melbourne so we shall be flying more often to see them as well, along with our network of friends which will be nice to see them more often (a few of them have had babies too) but it’s truly with heavy hearts that we made the call to leave New Zealand for now.  The only solace is that it’s not permanent.

I’ll be applying for permanent residency by this Christmas and hopefully that will make transitioning to and from a bit easier.

After we buy land, there will be developments that we will need to tend to, so you shall be seeing more of us again int the near future.  Wesley has his own little New Zealand passport and I know we’ll be back often for family visits as he continues to grow and turn into a little independent person.

Side note:  Wesley stood all on his own yesterday for nearly 30 seconds.  It was pretty incredible to watch.  We’ve also just planted a small winter crop of veggies that should hopefully be ready in a few months.

So I guess, if you’ve not had the chance to see us in New Zealand, you’ll have to come and check out Australia!

Ps: The photo of Mike was taken during a very special time when we were camping in the South West of WA.  We were whale watching and embracing the somewhat unconfirmed news that we were very likely travelling with the beginnings of life in my belly.  I’m really hoping we can show Wesley the area…it’s magical!

To put a seed into the soil is to believe in the future.  You trust that earth, water and time will bring you nourishing food.  Time has brought us 8 red onions and a random white one.

They grew in rather close quarters, and a tiny lesson has been learned.  We must plant them at a greater space to allow for bigger bulbs next year.

I’ve trimmed them and foolishly placed said onions onto the mantle in our kitchen.  Now, I am airing out our whole home from the intense perfume of fresh onions.

Now they sit on the porch airing out for a few days before I store them in the cupboard.

Do you have a recipe that features onions that you love?  I’ll probably need to get through these red ones rather quick!

We’ve been misted today in a dainty almost microscopic rain.  You know the kind that lightly falls on your face and skin, it feels refreshing?  Eventually it saturates you to the core, and yet at the same time is lovely because it is warm.  Summer rain, is so pleasant.

This constant rain has made New Zealand’s soil fertile and created an optimal growing season in many regions.  Palmerston North has had one of the wettest summers on record.  We can only help but flash back to our struggles in Eneabba trying to grow our food in the hot heat of summer.  We watered it endlessly.  Many of our plants died.  Here, we hope for some more sunlight to help ripen our green tomatoes. Though, I’ve heard they are good fried green anyway!